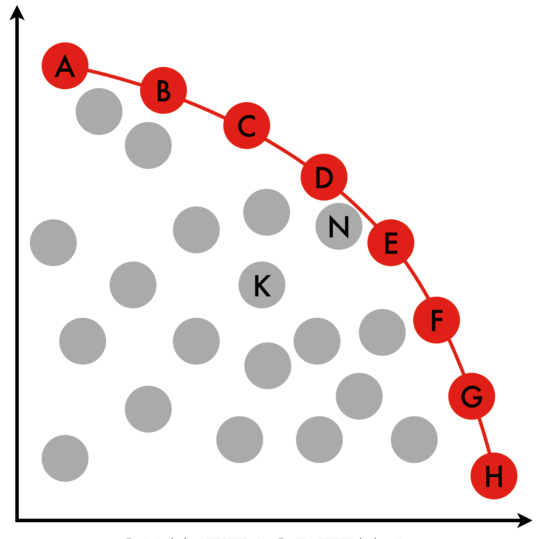 Content note: I started writing a post announcing a (Pareto-inefficient) change to the pledge cap interface and realized I first needed a post about what we call the Pareto Dominance Principle. But before that we needed a post about Pareto dominance. So, hooray, a whole mini blog series! Stay tuned for parts 2 and 3!

Definition: If A Pareto-dominates B then A beats or ties B along every possible dimension you could care about. Thus no one, no matter how idiosyncratic their preferences, could ever prefer B over A.

For example, I could claim that Ghirardelli chocolate is Pareto-dominated — there are other brands that are both cheaper and yummier (and have more pronounceable names).

Or this: My 30-year-old HP calculator (that I carried around everywhere I went as a kid/teenager, like a modern phone) is still not Pareto-dominated by what I carry around now: sure it’s like literally a million times less powerful but it had essentially infinite battery life, was indestructible (still works fine!), and never ever crashed. And it was Turing-complete, just like what we carry around now.

A few years ago the political website FiveThirtyEight got some mileage out of this concept for comparing political candidates, claiming that some candidates could be dismissed out of hand from the primaries if there was some other candidate both more electable and a better ideological fit for the party.

Pareto Efficiency/Optimality and the Pareto Frontier

To round this out with some related terms: Something is Pareto efficient or Pareto optimal if nothing Pareto-dominates it.

Another handy concept is the Pareto frontier, which refers to the set of outcomes (candidates, kinds of chocolate, whatever) that are Pareto efficient. You can see a simple example in two dimensions in the title image above. The red points constitute the Pareto frontier and the gray ones are Pareto-dominated. [1]

(None of this is to be confused with the Pareto Principle — named after the same person — which is the idea that 80% of the gain comes from 20% of the effort.)

In the case of software, the dimensions are the users. That’s right, every single user is a dimension. If there are more than two or three users it’s pretty hard to draw a visual representation like above but the concept doesn’t change. One version of a software product Pareto-dominates another if at least one user strictly prefers it and no user finds it worse.

Up next: The Pareto Dominance Principle for Apps and Websites.